Talia Security (Talia) is a company that specializes in the development of software solutions for SAP security management.

Talia developed Security Analyzer (SA), a product that is available in version 3.0.

SA implements all the fundamental entities that constitute the security of the SAP system: 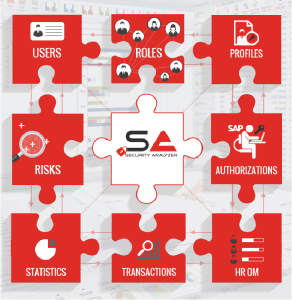 What is it needed for?

SA is a software solution that enables you to control the management of users and the profiling of SAP systems. It is possible to analyze the system off-line via the download of the main SAP Security tables and the usage statistics of users. This allows you to

Why is it a new product?

SA is needed because most of the other products on the market are mainly for auditors. Those who managed SAP authorizations and users didn’t have, up until now, a specific product capable of helping them with their daily tasks.

Furthermore, Security Analyzer does not require high-performance hardware to carry out the analysis (a simple notebook is sufficient) and it does not need any previous knowledge to be used.

The main problem with SAP profiling is that business representatives often find it difficult to understand how the roles were previously established and, in particular, what activities they authorize. SA is the link between the experts (engineers) and the business employees; creating a common language in conventional and encoded reports.

In many projects, when the Segregation of Duties (SOD) is implemented, a report is produced (often with millions of lines) which indicates the users’ violations. This means that the personnel that manages authorizations is required to modify a user’s authorization, in order to eliminate the violations, without interfering with other users. The logic behind role profiling (RBAC – role based access control) envisages, in fact, that the role for a same set of transactions is assigned to multiple users. It is possible to drastically minimize the remediation times via specific SA simulation functions.